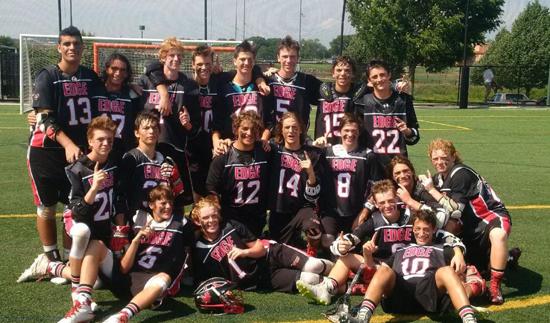 Congratulations to EDGE 2019 - Josh Dawick on his verbal commitment to the University of Denver! The Oakville, ON native has been a memeber of the EDGE program for two years and has proven himself to be one of the top attackmen in Ontario. A member of the Team Ontario U15 Field team in 2015, Josh is an excellent scorer, capable of finishing in tight around the net or from outside with a hard, accurate shot. Josh has exccellent offensive awareness and vision and is a capable dodger on offense. We had a chance to catch up with Josh and his experience so far with EDGE!

Josh was mentioned for his play this past fall at the NLF Freshmen Showcase where the EDGE team competed against the top teams in the country:

Dawick established himself early in the day as a talented scorer who can finish the ball at a very high level around the cage. He can flash to the middle and bang it very quickly with excellent form on his shots and a smooth release. He has super soft hands and showed range from outside on a couple of shots. There is something naturally deceptive about him when he is near the cage. In an early game against Long Island Express North, the right-hander took a deflected pass and lifted it up and into the net all in one big fluid golf swing. He later put on a show against the Crabs in a victory for the Edge with at least four goals and an assist. That game saw him cut to the center of the defense, somehow find a small spot and take feeds to pump in quick goals. He later made a really nice looking feed from just behind GLE, using a hesitation to hang up a defender and then push the ball right over him to a cutter open on the crease for an assist. He later got open on the wing, had time and room and somehow froze the goalie for a moment before rifling the ball just over the keeper’s left shoulder. Dawick is the son of Toronto Rock owner Jamie Dawick. He’s played box in Oakville and those skills look to translate well to the field, where he also has experience through the Oakville program. - Casey Vock - 3d Rising - http://3drising.com/articles/recruiting/boys/standouts-nlf-freshman-tournament-boys-latin

Where did you first begin playing lacrosse?

JD - I first started playing house league lacrosse when I was four years old and then made the transition to rep when I was six. I have played (and continue to play) for the Oakville Hawks, as well as with Edge and Team Ontario Box and Field.

Where are you currently enrolled/playing?

JD - I am currently enrolled at Appleby College and am playing for the Oakville Hawks and Edge.

Why did you choose Denver?

JD - I chose Denver because I felt like it was the perfect fit for me. I've always wanted to go to a school where I can get a great education, as well as being able to compete at the highest level of NCAA lacrosse, with the chance to win a national championship. I love the city of Denver and the campus is amazing. When I visited, I fell in love with both the academic and athletic facilities and knew that this was the school for me. I'm also going to have the chance to learn from two of the best coaches in the game of lacrosse, in Coach Tierney and Coach Brown.

What are you looking forward to most at Denver?

JD - I'm looking forward to receiving a great education and playing on one of the best lacrosse teams in the country, with some of the best coaches. I'm also looking forward to all of the great facilities that Denver has and being able to win an NCAA Championship! I'm excited to live in the city of Denver as well... There's no better place to spend 4 years.

JD - I hope to graduate from DU with a science degree, go to med school and eventually become a Sports Medicine Doctor. I also hope to stay involved with the game of lacrosse and continue to play, as well as give back to all the programs that helped me become who I am as a player and a person.

Any future advice for Edge members ?

JD - My advice to future Edge members is work hard and dream big. Nothing is impossible if you put in the work for it and believe in yourself. Whether it is on the lacrosse field, or in the classroom, you should give your best effort 100% of the time.

JD - My favourite memory with Edge was winning NSCLA this summer. We had lots of close games and pulled out a 1 goal win over Crabs in the finals, after a goal with 30 seconds left. Our team worked really hard and it was nice to have that pay off.

Who did you look up to growing up?

JD - Growing up, I always looked up to my parents. They do so many things for me and I wouldn't be where I am today without them. They work so hard for me to be able to live the best life possible and I really look up to them for everything they do.

JD - Firstly, I want to thank my family. My parents have made so many sacrifices to help me get to this point in my lacrosse career and I couldn't have done it without them. I would like to thank everyone involved with Edge. I want to thank Stu Brown and Alan Tsang for everything they do. From booking the best tournaments, talking to coaches, helping me with highlight videos, etc... I really appreciate it. I want to thank Coach Pete (Debrone) and all my teammates for helping me become the player that I have become. I want to thank all of the Coaches and Teammates that I have had throughout my career playing both box and field with the Oakville Hawks. Through lacrosse, I have made many life long friendships, and I am very fortunate for that.